King and Queen of Hearts comparison with Montane Bird Pairs

A pair of Lesser Shortwing were quite confiding when they appeared out of nowhere from the mossy undergrowth, to perch on a low branch (as above). They behaved very mouse-like, hopping around on the ground. The male Shortwing flipped its tail upwards and downwards whilst perched, before disappearing into the thick undergrowth. eBird Photo and Sound Quiz on eBird Malaysia has featured this montane species before as part of a 20 Multiple Choice Questions from likely birds in the area which are calculated from eBird checklists submitted. The Quiz can be customized to a specific location i.e. within Malaysia and is a fun tool for practicing bird identification and exploring photographs of birds from eBird checklists. Just sign up as eBird user to play this Quiz. Play the Quiz HERE. 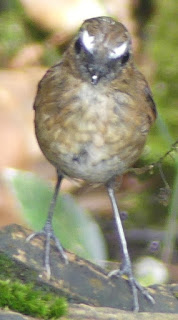 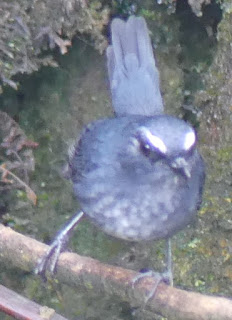 Mr and Mrs Lesser Shortwing were not the only impressive pair of species that day in Genting Highlands. Also making a grand appearance that sunny Saturday in Ulu Kali were a pair of Snowy-Browed Flycatcher. The female SB Flycatcher was the first to appear followed by the male Snowy-Browed Flycatcher below who appeared more shy. The Large Niltava was actually the first pair of birds to make an appearance in Ulu Kali that morning. Reminder to self that although the temperature in Ulu Kali is cool when the mountain wind blows, there is a high likelihood of getting sun-burnt at an altitude of 1,000m above sea-level:( Siberian thrush and my 2017 birdwatching experience at Ulu Kali can also be read HERE. 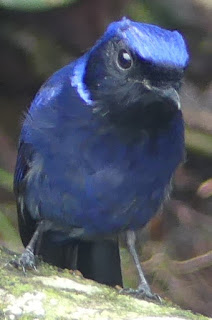 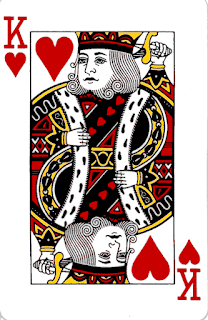 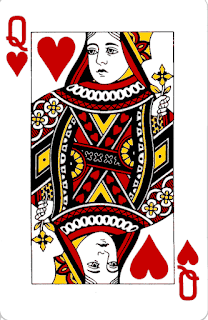 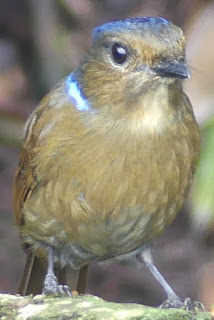 There will always be a King and a Queen of Hearts in every deck of cards, so for me to observe both "King" and "Queen" pairs of Snowy-Browed Flycatcher, Lesser Shortwing and Large Niltava was like hitting jackpot of a different kind in Genting Highlands.
Posted by tripletrogon at 6:35 PM 1 comment: 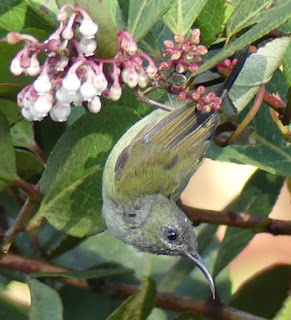 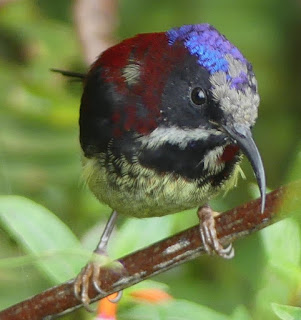 Black-throated Sunbird, female and male
Ulu Kali is a well-kept secret of Genting Highlands. Nestled at 1,000m+ above sea level in the mountain ranges of Peninsular Malaysia, this area houses a radar station with the last green remnants of montane forest located nearby a place more well-known for international concerts, shopping malls, theme parks (20th Century Fox being the latest to open) and most famously - a casino, the first to operate in Malaysia under "Uncle" Lim Goh Tong, whom every Chinese in Malaysia would dream of being related to. Montane birds can still be found in Ulu Kali and the migratory season is already in full swing with the likes of Grey Wagtail, Yellow-rumped Flycatcher (also known as Korean Flycatcher), and an unidentified mystery raptor that flew past the distant horizon. 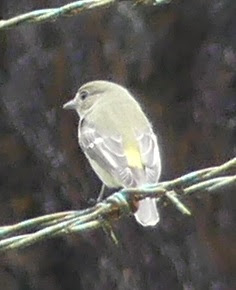 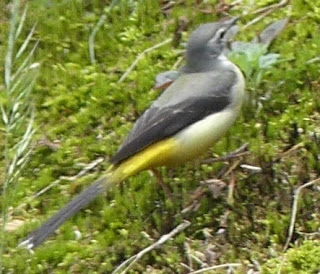 Rufous-winged Fulvettas were very active that Saturday morning, hopping alongside the undergrowth before catching the insects on the wing. These fulvettas were very gregarious, not staying still for long as they hopped onto the fences alongside the radar station, some on the mossy grounds before flying off into the opposite side of the road. Some snapshots of the Rufous-winged Fulvettas captured "in flighty and hoppy action" that morning are as below:- 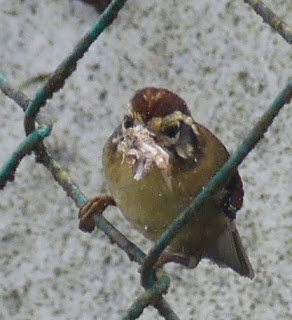 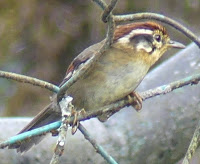 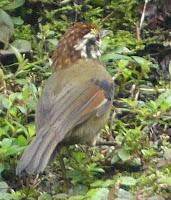 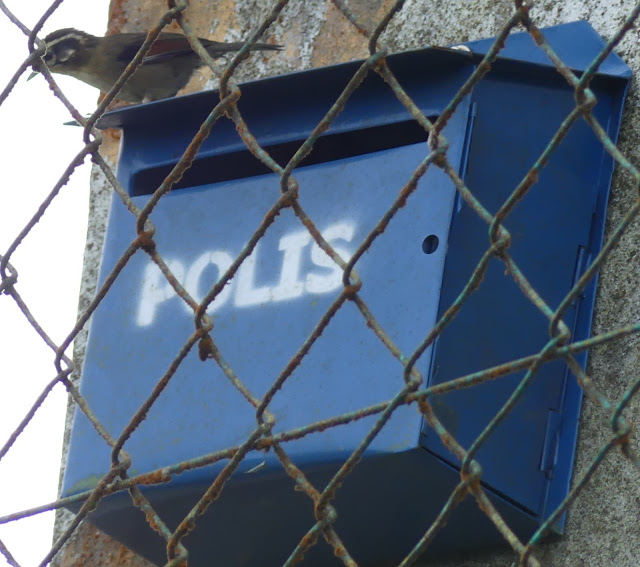 One of the fulvettas had even hopped onto the Police box inside the radar station. This flock looked to be gorging themselves on the insects, together with the Grey Wagtails, Mountain Leaf Warblers, Large Cuckooshrike, Asian Brown Flycatcher and Mountain Bulbul. 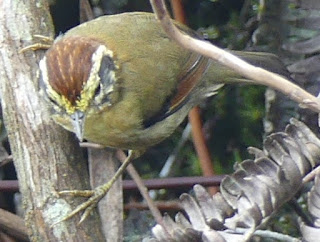 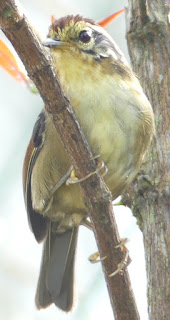 The Siberian Blue Robin turned up only for around a minute, inside the radar station. My friend and Wader Sifu Ang Teck Hin managed to snap a picture of this migrant male. His picture has been entered in the eBird checklist for Ulu Kali, the link of which is provided below. 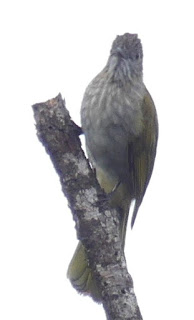 Whilst my friend Ang and myself settled in for lunch, which consisted of Nasi Kerabu (for me) and Nasi Lemak Ayam Goreng (for Ang), a Peregrine Falcon decided to fly by the horizon. Its bullet-size shape and flight patterns are so fascinating. A pair of Peregrine Falcons were seen in Goh Tong Jaya area and my write-up on this pair is available HERE. Blythe's Hawk-Eagle also turned up that mid-morning earlier, circling above the mountain range. Its high-pitch calls were distinctively different from that of the Crested Serpent Eagle. The Eagle was the first raptor we saw that morning as we approached Ulu Kali.

On a separate and non-nature related topic, Genting Highlands Resort is operated by the Genting group, a well-known brand originating from Malaysia that has registered their own top level name HERE.
Posted by tripletrogon at 11:35 AM No comments:

Flameback in the City

Nearly missed this pair of Common Flameback that Saturday afternoon at Kuala Lumpur Lake Gardens (renamed as Perdana Botanical Gardens in 2011 according to this news article HERE). Saw the female first as it was feeding alongside the trunk of a huge tree. Heard it calling earlier but couldn't quite spot it until I was about to leave. The male species of Common Flameback was spotted around the same time as this female. The male woodpecker was moving around the trunk of a tree further away from the tree above where the female was. The features of the Common and Greater Flameback are described in detail in Field Guide to the Birds of Southeast Asia by Craig Robson and I can just remember to look out for the differences in the nape and sides of the faces. Must learn the names of trees in this side of the park since common names of trees within the Lake Gardens are available in their website HERE. Can hear the audio recordings of this woodpecker HERE. Other birds seen that day were entered into my eBird mobile app and the pictures uploaded later once I had access through my laptop (and Internet of course). Ebird checklist is available HERE.
Posted by tripletrogon at 6:51 PM 2 comments: