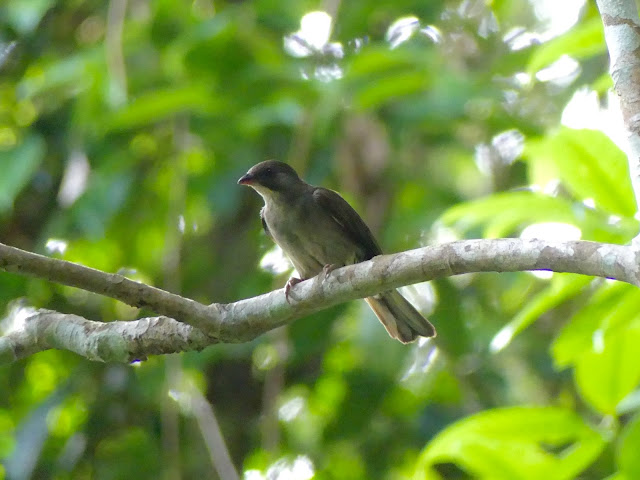 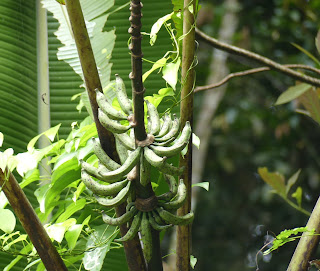 Malaysian Honeyguide, the sighting of which provided a few minutes of bliss on a Sunday morning in Bishop's Trail, Fraser Hill during Wild Bird Club Malaysia outing, with story to this outing available for reading HERE. My right ankle was bleeding the night before from a leech bite which I had discovered only after I had pulled out my sock which was soaked in blood, Saturday evening after returning from birdwatching at Telekom Loop. Wild Bananas of Fraser Hill on which some of the forest animals feed on were growing by the side of the roads. This versatile fruit has many local varieties such as Pisang Mas, Pisang Berangan, Pisang Tanduk Kerbau, Pisang Susu (which grows well in gardens it seems) which reminds me to collect sapling from a friend for my sister's garden. 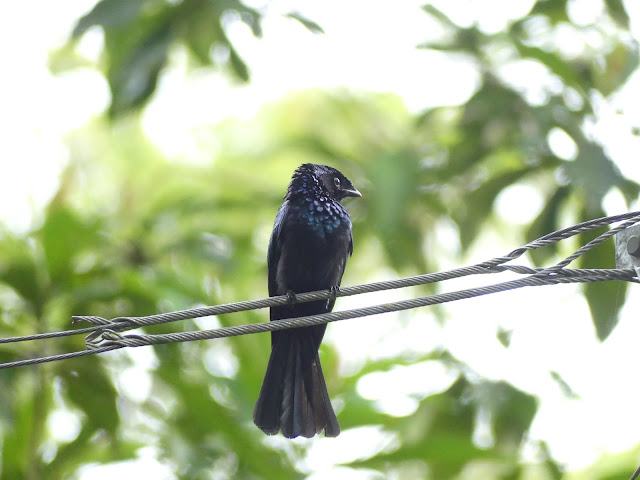 Lesser Racket-tailed Drongo was very active on both days of the trip. 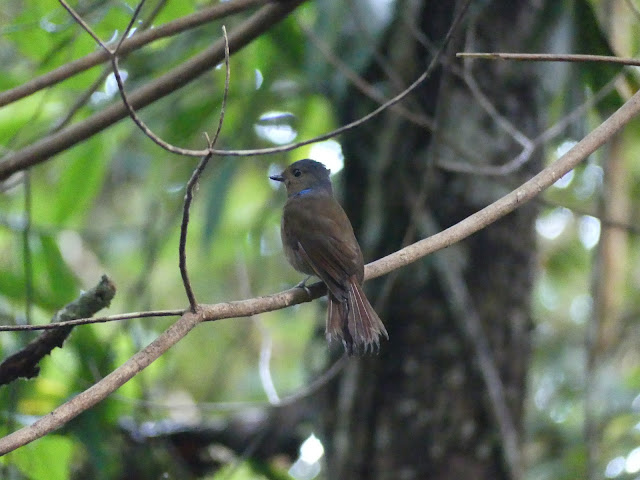 Large Niltava (Female) was close enough for me to get a record shot of. The male Niltava was looking for grubs along the edge of road, and it flew off as Ang's Isuzu came nearer. 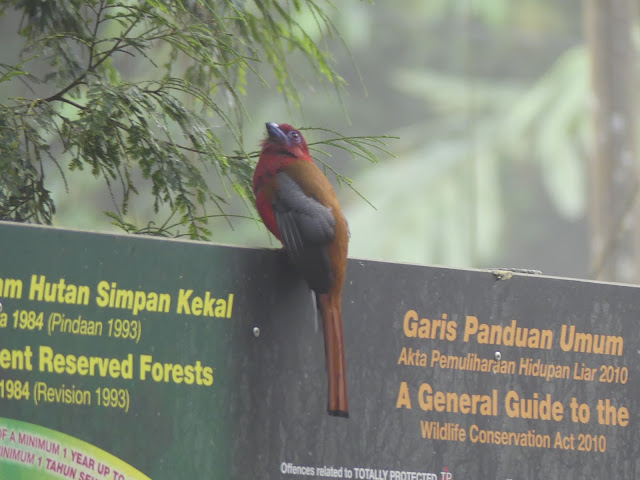 A very confiding Red-Headed Trogon that flew to perch on this signboard, a timely reminder of the Wildlife Conservation Act 2010 and how important it is to ensure the Act is complied with and enforce, where necessary to protect this red beauty of Fraser Hill.
The White-tailed Robin, male and female were hopping about at Mager Road and Telekom Loop. It was a real delight to observe the male White-tailed Robin hunting for its food alongside Mager Road, from inside the car. 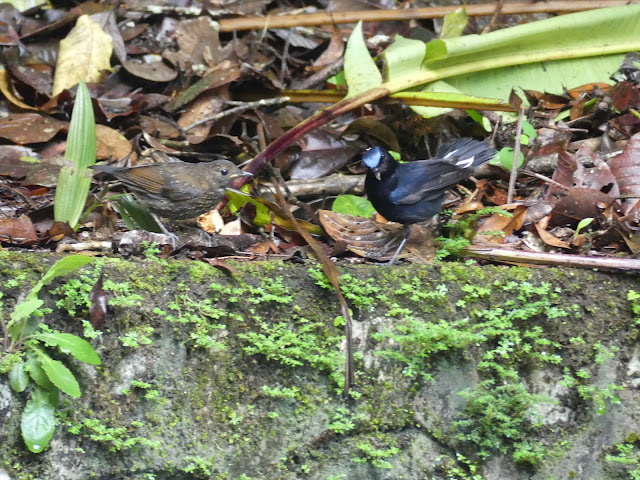 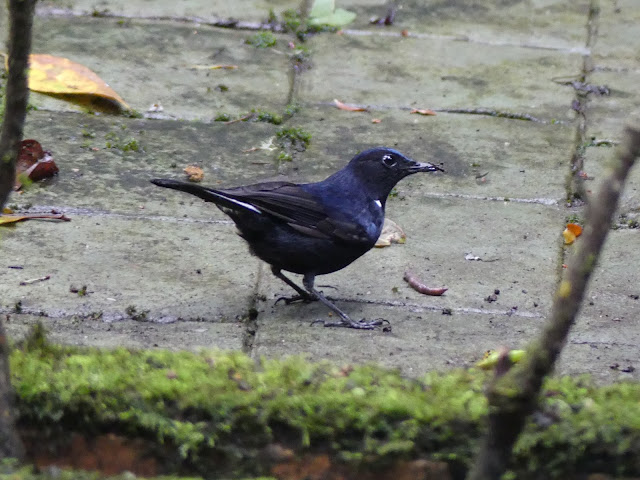 White patch on the neck of this White-tailed Robin, male was only visible when it stretches out its neck. 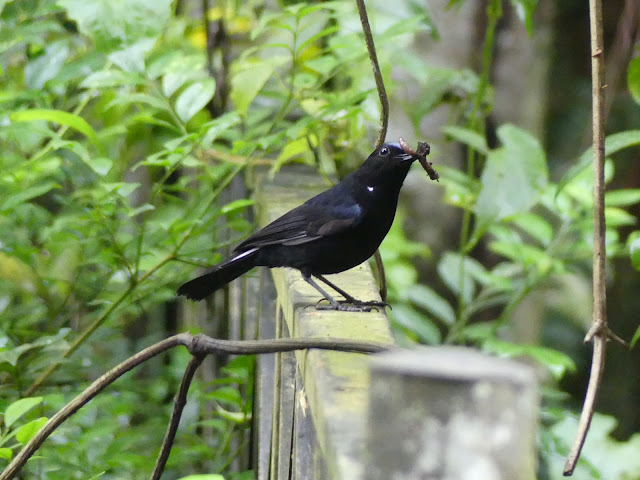 This White-tailed Robin is a lifer for me in Fraser Hill since I've never actually had a good look of them before in Fraser's. I've observed them in a previous trip to Cameron Highland. 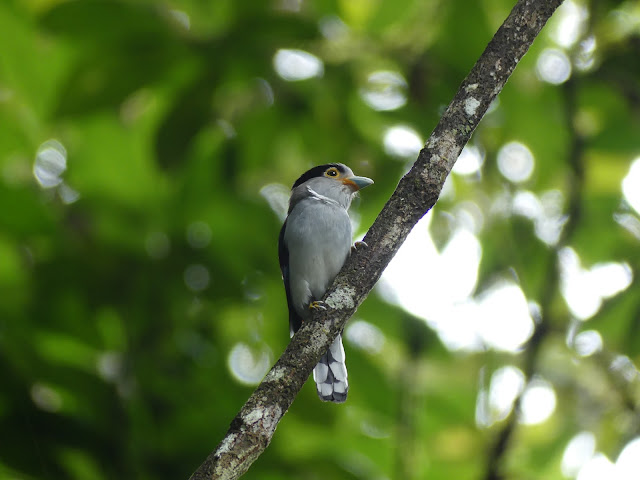 Silver-breasted Broadbill, female, with her naturally striking and beautiful necklace. Compare this Broadbill's natural silver jewellery with that worn by "Anne Boleyn", the character played by Natalie Portman in a movie, although I'm wondering what is the question that she is referring to in the GIF image below;)

To quote Michael McCarthy "The Moth Snowstorm Nature & Joy" on appreciating bird songs on an individual basis and not through dollars and cents:-
We can generalise or, indeed, monetise the value of nature's services in satisfying our corporeal needs, since we all have broadly the same continuous requirement for food and shelter; but we have infinitely different longings for solace and understanding and delight. Their value is modulated, not through economic assessment, but through the personal experiences of individuals. So we cannot say - alas that we cannot - that birdsong, like coral reefs, is worth 375 billion dollars a year in economic terms, but we can say, each of us, that at this moment and at this place it was worth everything to me. Shelley did so with his skylark, and Keats with his nightingale, and Thomas Hardy with the skylark of Shelly, and Edward Thomas with his unknown bird, and Philip Larkin with his song thrush in a chilly spring garden, but we need to remake, remake, remake, not just rely on the poems of the past, we need to do it ourselves - proclaim these worths through our own experiences in the coming century of destruction, and proclaim them loudly, as the reason why nature must not go down.
Posted by tripletrogon at 4:20 PM 1 comment: