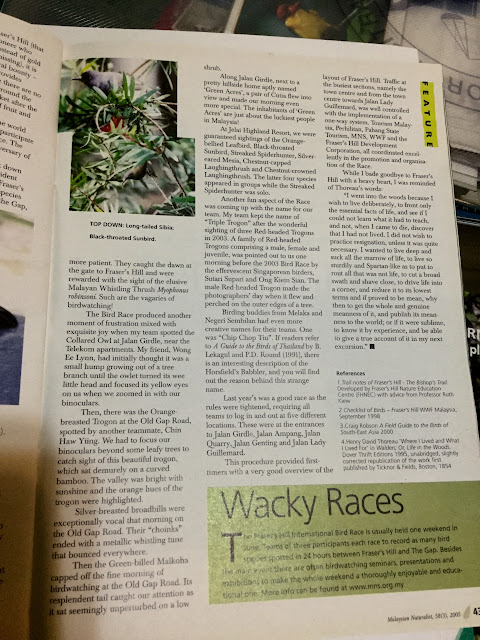 Bird species count was to me an important objective in Fraser Hill Bird Race. It would be reassuring to know that unique montane species remain well-protected and if the Race continues to highlight this importance objective, then it is an event worthy of national and international stature. The International Union on Conservation Nature (IUCN) has list of threatened species including one for birds and over 10,000 species are listed in IUCN Red List. Birds are important for maintaining healthy ecosystems so it is vital that they are protected and conserved, according to IUCN website.
Posted by tripletrogon at 10:43 AM 3 comments: 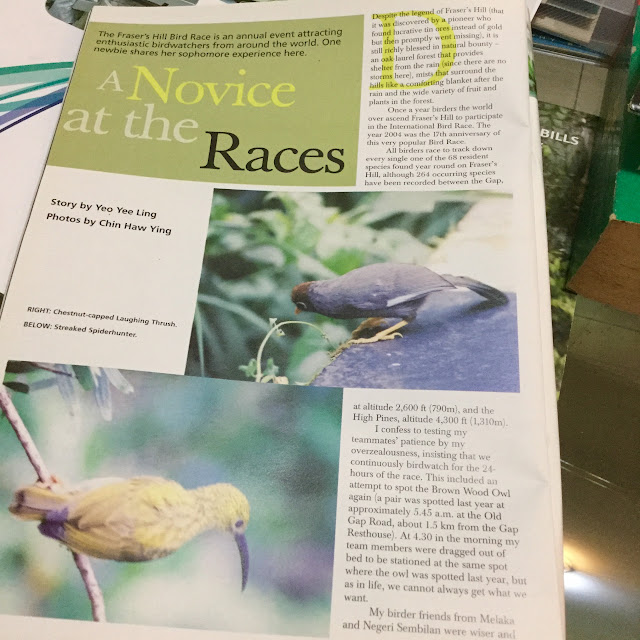 This was an article I sent to MNS when my friends and I participated in the Fraser Hill 2005 International Bird Race. It was to be our final Bird Race as the registration fees shot up almost 100% after 2005. I had a different title for this article and didn't realise the MNS Naturalist editor in 2005 had unilaterally changed the title of my article until I got the magazine. The term "Novice" was used to describe me and I had to admit I did let this word bother me at that time. Eleven years have since passed, all I can do now is smile and read my article to relive sweet memories with my friends. The article was dedicated to my favourite birdwatching venue in Malaysia which is Fraser Hill so to heck with the title. Life is after all a continuous learning process. Sticks and stones may hurt me but words (in this article - one word) won't. Birdwatching has come a long way since 2005 and it is time for me to reconnect with Mother Nature. Was lucky that Ooi Cheng Hock had kindly driven my friends and I up to Fraser Hill in his Volvo.
Posted by tripletrogon at 1:08 PM 3 comments:

Asian Waterbird Census (AWC) 2016 was carried out at Sungai Balang and Parit Jawa in Johor by myself and Ang Teck Hin. Worth getting up at 3am in the morning to see the Small Pratincole at Sungai Balang. I drove towards Muar from Kuala Lumpur using AMJ exit at Jasin. Took a short nap just before Jasin/Bemban exit after Ayer Keroh and reached Parit Jawa by 7.30am. We had breakfast at Parit Jawa with me ordering Lontong and Kopi O, Roti Canai and Kopi for Ang before starting our count at Sg Balang. THE BIRD OF THE DAY (probably also OF THE MONTH) for me was the Small Pratincole. Smaller than the Oriental Pratincole, this was a rare bird indeed for me. Birds of Thailand by Craig Robson (2002 edition) cover both these Pratincole species. We spotted three resting on the gravels of the road alongside the green paddyfields of Sungai Balang. Time for me to get a copy of Birds of Peninsular Malaysia Field Guide, to learn about their status in Malaysia. 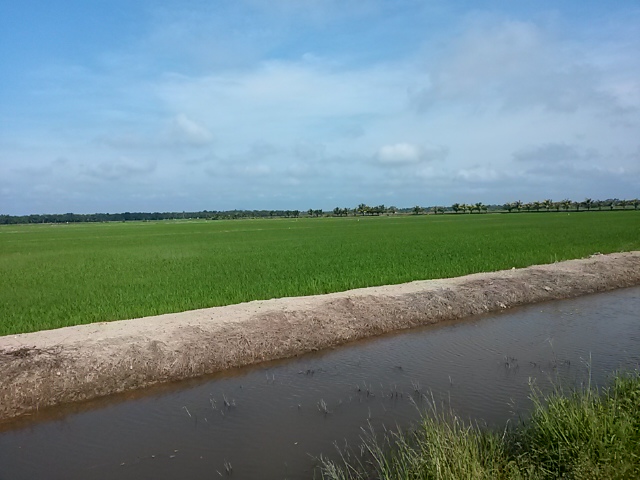 Jade Green Paddyfields of Sungai Balang on a hot Sunday morning. Wasn't windy. Comfortably counting the waterbirds in each paddyfield lot, together with Ang in his Four Wheel Isuzu from 9am onwards. Can you see the three Small Pratincoles (two standing and one sitting) in the picture below? These pratincoles were so well-camouflaged against the graveled road but thank goodness they flew off when I started walking towards them, so any cars, motorcycles or bicycles would make them fly out of harm's way. 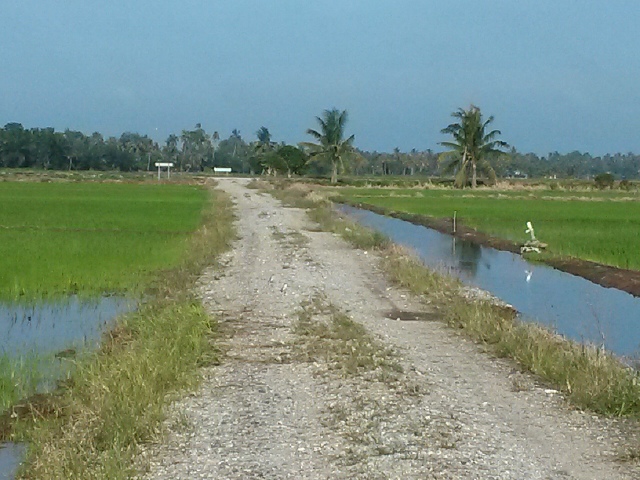 The starting point of our count at Parit Utama Parit Yusof. We exited from Parit Sarang Buaya (not sure what the "Kel." stands for). 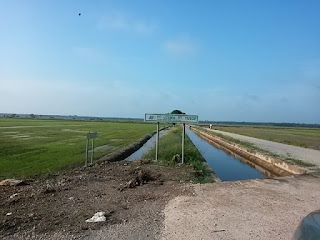 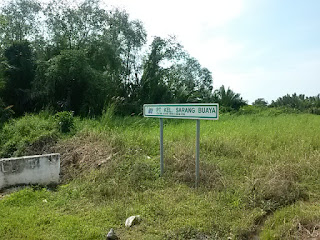 Second count site was at Parit Jawa, Muar below. Low tide and some fishing boats were coming in from the Straits of Malacca. Total of 23 Species sighted (and counted) in Sungai Balang. 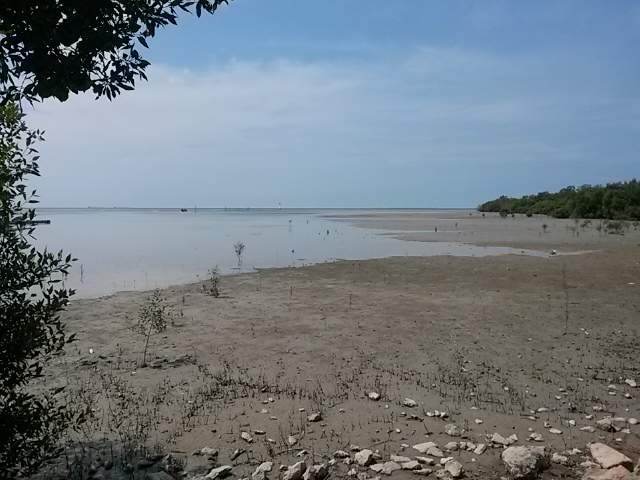 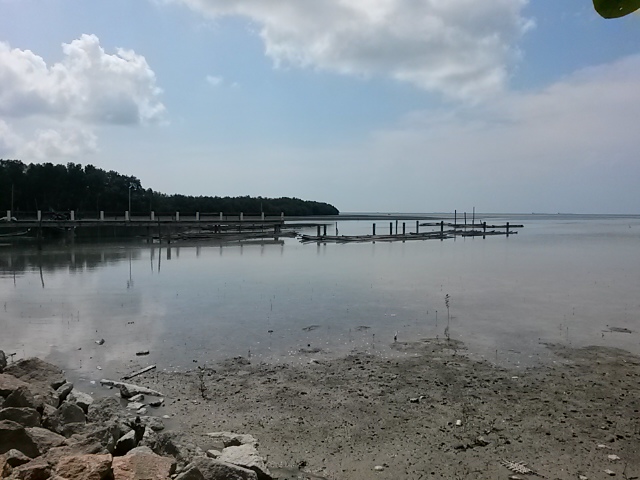 Ended our count at Parit Jawa, with 13 species sighted and counted. We had lunch at Chun Hui Restaurant. Our lunch bill was a whopping RM98, with the red snapper asam pedas at an eye-opening RM58. We manage to do some birdwatching at Pantai Penyengat Laut, Big Pond near Sungai Rambai Recreational Park and Sungai Rambai ricefields. Changeable Hawk-Eagle was perched on tree branch, flock of Bee-eaters with some spreading out their wings and basking in hot sun on the muddy road and flock of Black-Backed (purple) swamphen, common moorhen and egrets were seen within the Big Pond area. The Sungai Rambai ricefields were so peaceful and calm with sightings of the white-browed crake, water cock, lesser whistling duck, zitting cisticola, common sandpiper, cinnamon bittern, harrier (possibly Eastern Marsh), black-backed (purple) swamphen, common moorhen, white-breasted waterhen, egrets and purple heron. Calm and beautiful breeze was blowing in the late afternoon at the ricefields. We officially ended our birdwatching outing at around 5pm.

Posted by tripletrogon at 2:36 PM 5 comments: 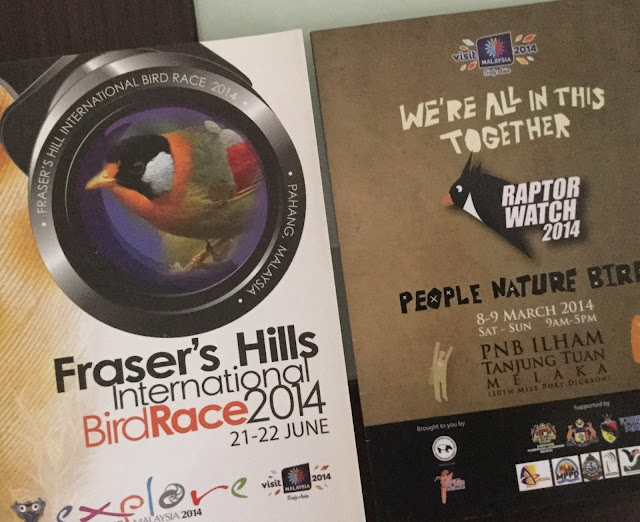 The countdown to Chinese New Year 2016 begins! Good old Goat will be making way for the (Fire) Monkey and spring-cleaning for me has begun since first weekend of January 2016. Older editions of my bird books, field guides and reports from Malaysian Nature Society on Important Bird Areas, Milky Storks in Kuala Selangor and some novels have been pledged as donation to the Fraser Hill Community Library which has good website here. Fraser Hill was venue of inaugural Wild Bird Club of Malaysia (WBCM) meeting. More bird books, stamps, coins, badges and stickers will be dusted off ready for distribution amongst friends, nieces and nephews. Am also looking forward to be at Tanjung Tuan (Malacca and Negeri Sembilan) for Raptor Watch 2016. The 2014 promotional material for Fraser Hill International  Bird Race and Raptor Watch were a pleasant find during springcleaning. Old editions of Suara Enggang were also found including a 2007 Suara Enggang with picture of Brown Bullfinch taken by David Lai. Cameron Highlands is on list of places to visit for me. Fingers crossed this elusive bullfinch will turn up to give birdwatchers a memorable Year of (Fire) Monkey 2016! 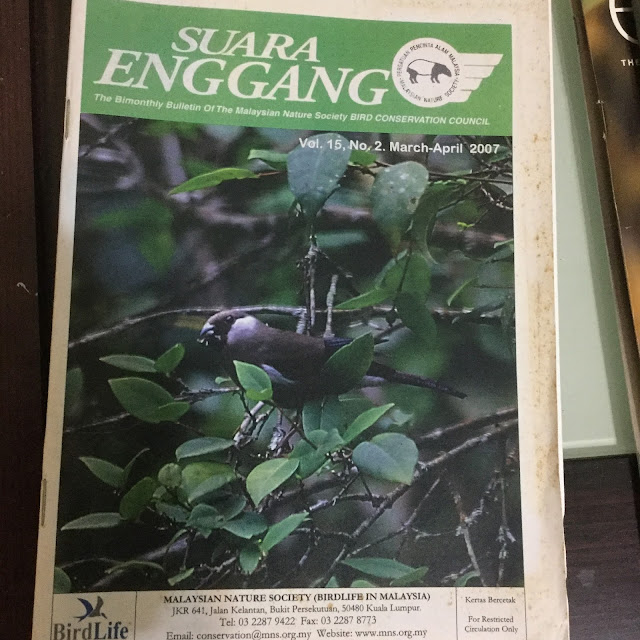 Posted by tripletrogon at 4:55 PM 3 comments: