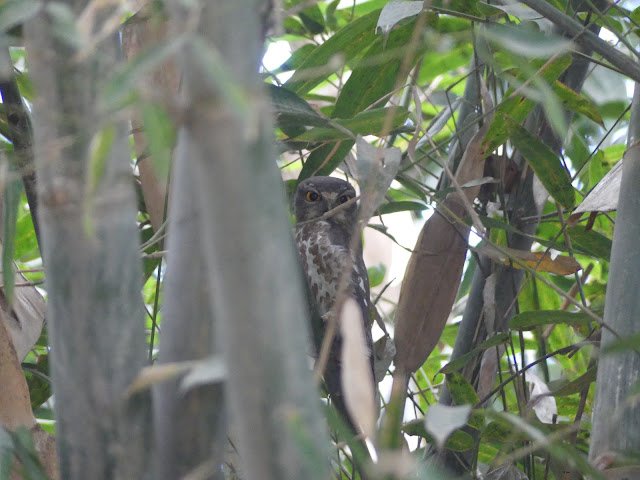 A second species of Owls that also found sanctuary in this valuable patch of forest in Ranibari was the Brown Boobok (Ninox Scutulata). EBird option tick was Brown/Northern Boobok. Read about diurnal owls somewhere in my Craig Robson, 2000 edition. Spotted Owlets and Brown Booboks really made my mid-afternoon birdwatching memorable in Kathmandu, Nepal. The last time I saw this Boobok species - it was called Brown Hawk Owl - was during an outing to Penang Hill, a long, long time ago. Time to go look for Field Guide to the birds of the Indian subcontinent, Nepal, Bhutan in the next Big Bad Wolf Sales which should be coming soon to several places in Malaysia this 2018:) Had blogged about my 2017 BBW find HERE. 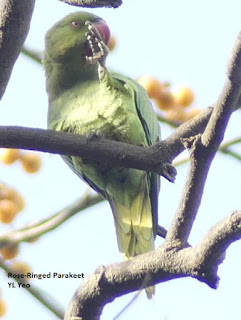 The other birds spotted at this Community Forest. Almost all species seen by me in Ranibari Community Forest such as the Yellow-Bellied Fantail, Rose-Ringed Parakeets and Blue-tailed Magpies were my lifers. The full list has been entered into eBird and is available HERE . Nepal hosted an Internet and Domain Name Registries meeting in Kathmandu from February 2018 onwards (just after Chinese New Year public holidays). I was happy to come across the local website "Photos of Nepal" with one of the webpages dedicated to WILDLIFE, which described the Spiny Babbler as being unique to the country which has 900 bird species, 30 of them being globally threatened. Am now wondering which species of bird was introduced to Nepal..... 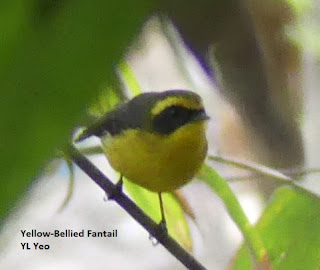 Posted by tripletrogon at 6:22 PM 5 comments: 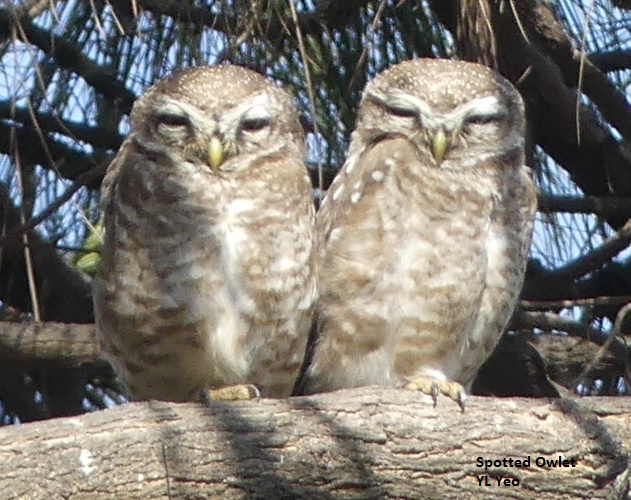 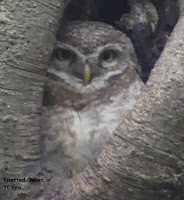 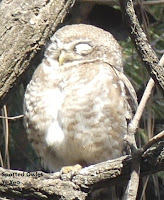 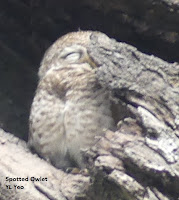 Work-related trip to attend a meeting in Kathmandu, Nepal gave me the rare opportunity to visit a Community Forest in the heart of Kathmandu, Nepal. Thanks to my birdwatching friend from Nepal, Rajendra Gurung who introduced me to Ranibari Community Forest. When he said I could see owls in this forest, I was not convinced more so since he planned to start birdwatching at around 12.30pm noontime! Lo and behold a family of Spotted Owlets peered at us in broad daylight. It took me a few minutes to FIND them since the colour of their plumage created an almost perfect camouflage against the trees. It was only when Rajendra pointed out the hole in which the owlets were in that I almost whooped for joy when I spotted them! It seems this precious patch of forest is home to this family of owlets. This family of Spotted Owlets, other feathered and furry friends continue to co-exist peacefully with the residents of Kathmandu. Jyotendra from Bird Conservation Nepal had also joined us for this mid-day birdwatching outing and he pointed out that the forest were demarcated and fully fenced against the residential area that surrounded it. There was a small Hindu temple on top of the hill inside the forest. Two ladies were operating a food stall at the entrance to this forest and we had lunch after completing our walk around the forest. The chapati and potato curry were served piping hot together with hot chai. I stayed on to bird at the forest until 4.30pm. The forest closes by 4.45pm. I would have loved to bird until then but I was not familiar with traffic in Kathmandu and I had a return flight to Kuala Lumpur to catch that Sunday night. The forest was silent for some time in the earlier parts of that Sunday afternoon. It only came alive in the last hour before closing time. I had a much better view of the Rose-Ringed Parakeet (more of that in the next post) in the community forest. There was small flock of Rose-Ringed Parakeets that I had seen earlier near my hotel in Durbar Marg, Kathmandu. This flock perched on a tree-top opposite a very busy road. These Parakeets only came in to roost in the trees by 6pm. It was already dark in Kathmandu by 6pm evening time and there was no chance of a good view since my meetings ran from morning to evening. Am thankful to Rajendra for unveiling this best kept secret of Kathmandu! More pictures of Spotted Owlets below, rounding off a memorable albeit very short birdwatching opportunity for me during a work trip to Nepal. Read on about Ranibari Community Forest here. Northern Boobok coming up in the next post. 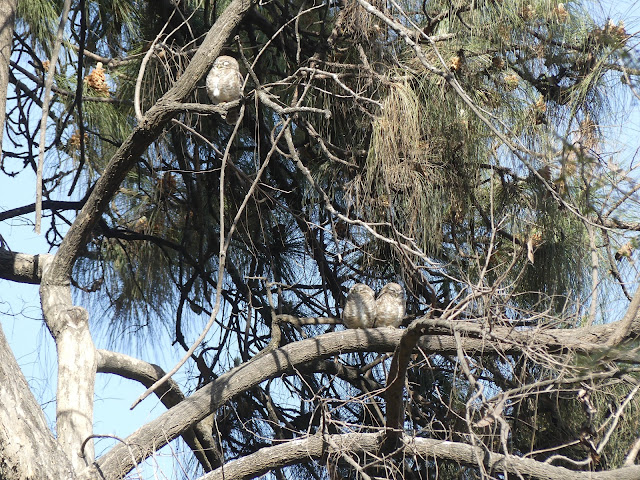 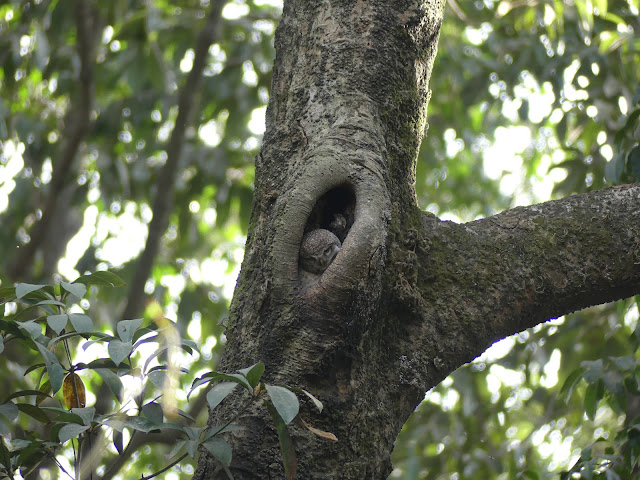 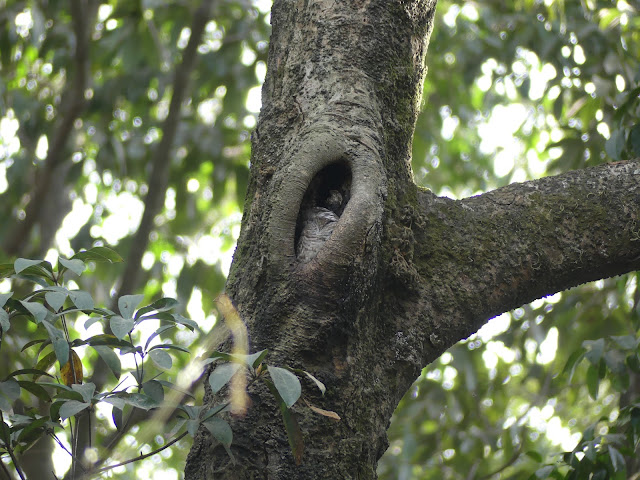 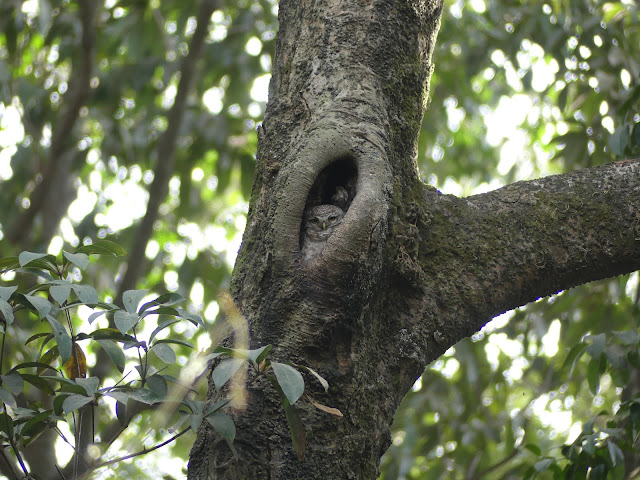 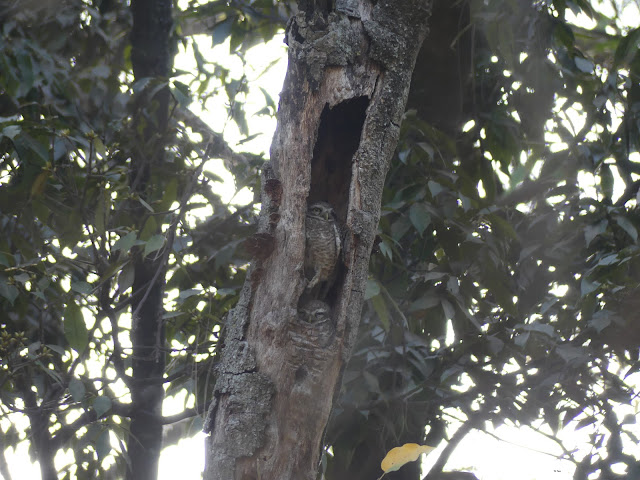 Posted by tripletrogon at 5:58 PM 4 comments: 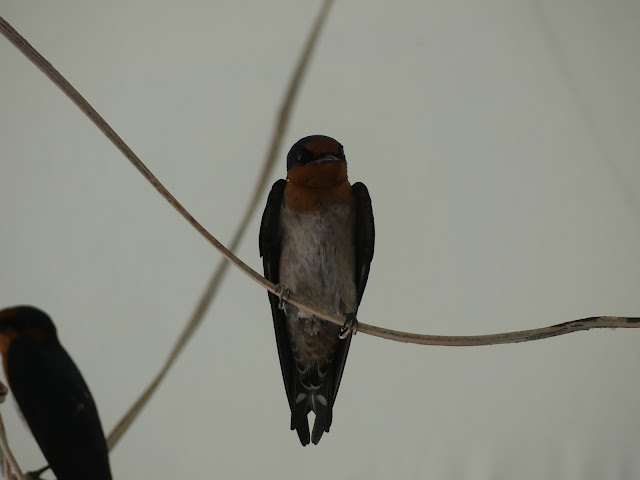 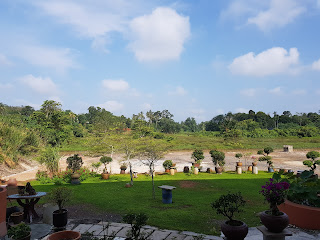 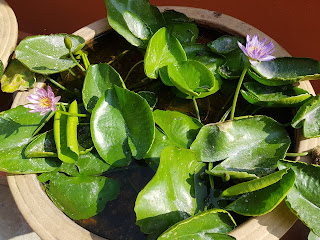 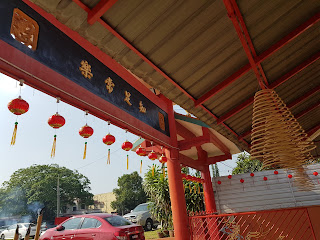 This pair of Pacific Swallows returned to my family house in Segamat, Johor and we welcomed Chinese New Year 2018 together with them literally under our roof:) Preparations to welcome the Year of Earth Dog had me whizzing my mum around town, as traffic more than tripled with Malaysian Chinese working outside of the District returning home once a year to be with their families. Malaysians from other States, travelers (and Singaporeans too:) fully utilized the long weekend for their holidays since Chinese New Year is one of the major public holidays in Malaysia. My sister had returned earlier from Singapore and with her help, errands and chores were completed twice as fast. Subway sandwich shop had opened up in Segamat, and my father had also eagerly informed us that there was a spanking new Riverside open-air cafe cum food centre just next to the Segamat river - hope this cafe doesn't go underwater when monsoon season arrives. We visited the temples early in the morning on the first day of Chinese New Year. The purple water hyacinth was in full bloom at the back of the Jalan Muar temple. Potted flowers and tangerines (inedible due to the amount of pesticide sprayed to keep insects away) added colour to the temple grounds. We had just missed the lion dance which according to my mother did perform at the Goddess of Mercy (Guan Yin Ma) temple in Kampung Abdullah on the first day (morning session). The lion dancers performed at this village temple in 2017 but during the afternoon of first day of CNY (much to the delight of my niece and nephew from Australia who was home in Malaysia that year). We had vegetarian meals on the first day of CNY which included steamed fluffy vegetarian buns. IP Man 3 was the CNY Day 1 movie in 2018 and Donnie Yen portrayed the teacher of Bruce Lee brilliantly. IP Man was the Chinese name of this Wing Chun kungfu practitioner and his loyalty to and love for his country, friends, family and his integrity and honesty in the face of overwhelming odds (at a time when corruption and racism against the Chinese were common in China and Hong Kong), were exemplary indeed. I think every Chinese in the world can relate to the  universal values that IP Man embody. You can watch the trailer of IP Man 3 here. 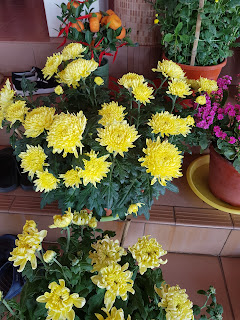 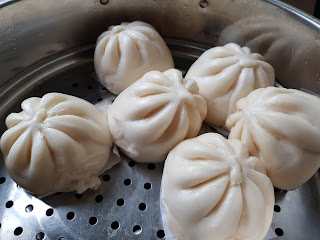 A little bit of birdwatching in my hometown on 14th February revealed, among others a pair of Oriental Pied Hornbills which appeared to be nesting in a tree next to a very busy inner road. I birdwatched at a safe distance since this road curves upwards and downwards on a hill. Was very glad to see the hornbills choose this tree since motorists would be busy concentrating on the road, and not on them:) The list of birds have been entered in eBird Malaysia portal.  I'd like to end this blog by sharing some pictures of the Pacific Swallow pair that have become a part of my family home. Chinese New Year wouldn't be complete without seeing this pair and their presence truly heralded the coming of Spring in a hot tropical country like Malaysia! 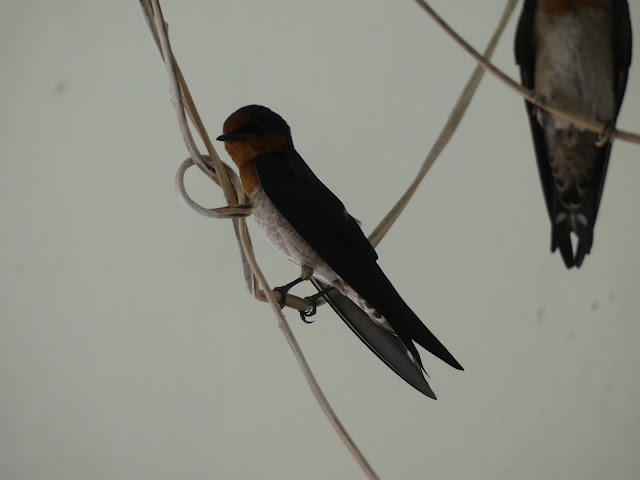 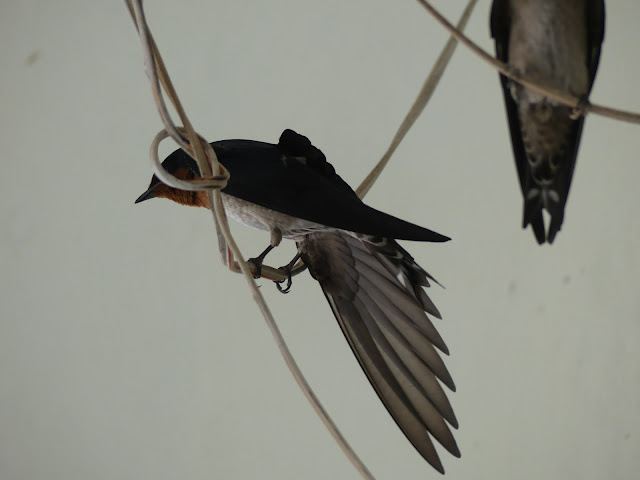 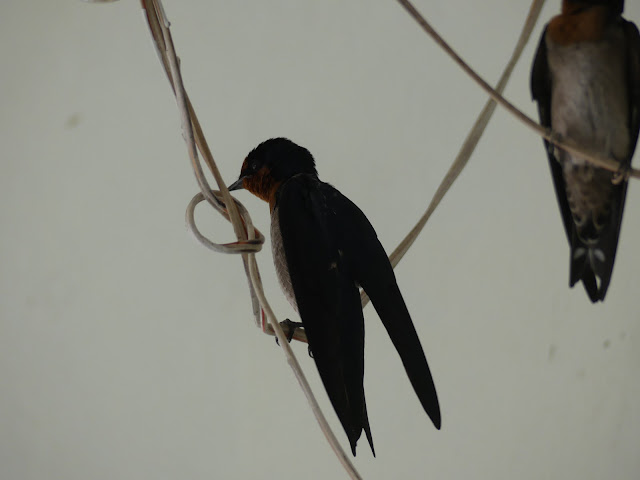 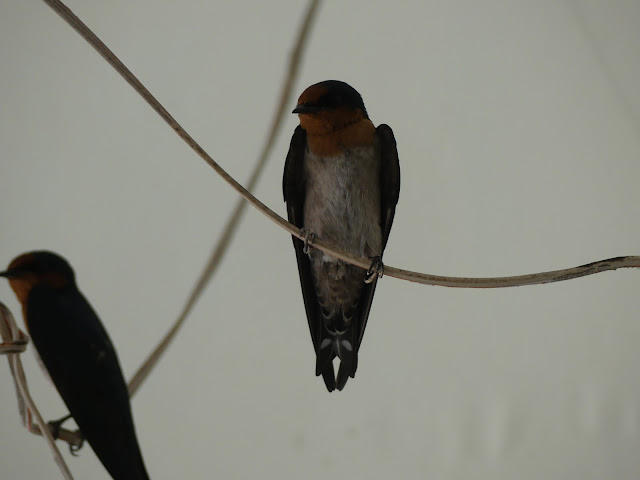 Posted by tripletrogon at 6:23 PM 3 comments: