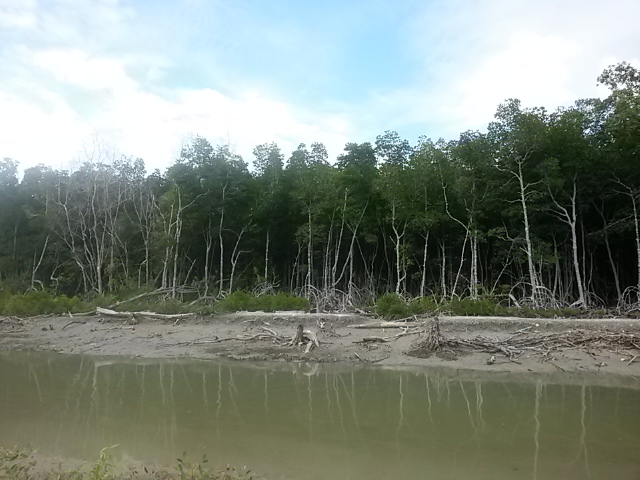 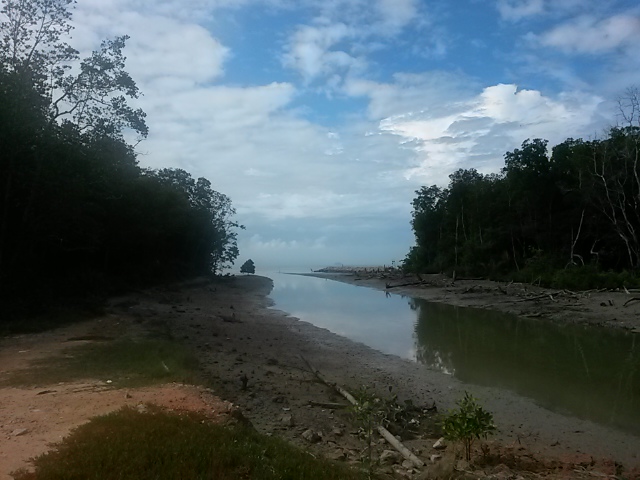 Was at Sungai Rambai Pond area earlier in the morning. It was already getting hot & sun was so glaring on the way to the Pond by 7.30am. Lesser Whistling Ducks were no longer at the pond area. Black Kites were out and about when we arrived at the pond. A Black-shouldered Kite circled near the pond before flying back towards oil palm plantation. Big flock of Black-backed (Purple) Swamphen were busy feeding within the pond. Chicks and Juvenile swamphen were seen too with latter in all-black plumage. Left pond by 9.30am as it was very hot by then and headed for Merlimau. 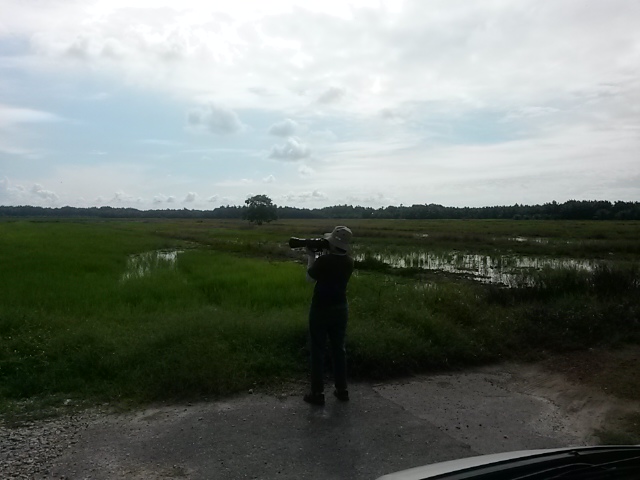 Fong Lin in photographic action at Merlimau ricefields. The Grey-Headed Lapwing was too far off for her to take a good picture of it. This Lapwing species was larger than the twenty (20) plus Red-Wattled Lapwings that were. Its Greyish duck-like head and black breastband were very visible. Grey-headed breeds in northeast China & Japan and mainland population is reported to be wintering in northern Southeast Asia, according to Wikipedia. To see this lone Grey-headed Lapwing in Merlimau ricefields was a big surprise for me. I checked with my birding guru from Malacca & Negeri Sembilan, Ang Teck Hin and he said it was possible as he had seen it before in the paddyfields of Sungai Balang, Muar. 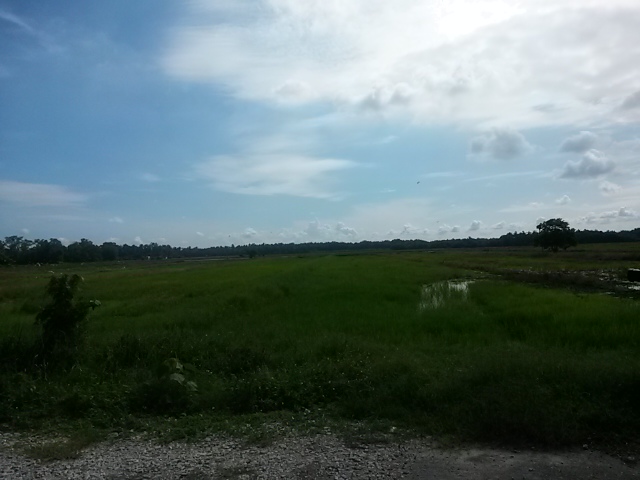 The paddyfields were filled with 20+ Red-Wattled Lapwings, calling out to each other with the solitary Grey-Headed Lapwing amongst them. Bigger flock of egrets were in a nearby patch that was being ploughed by a paddyfield tractor. The egrets followed the tractor with such zeal, eagerly waiting for the "food" that would be churned up by all that ploughing action. 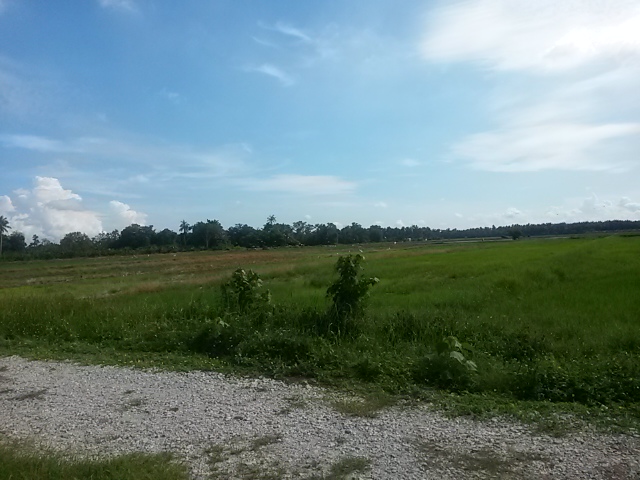 Getting too hot by 11am, so Fong Lin and I left Merlimau Ricefields by then. We reached Muar by 11.45am after making a quick stop to buy some coconut water at one of the roadside stalls. We met up with Fanny, a Muarian herself who drove us to Parit Jawa which is well-known for Asam Fish dish. The restaurant at Parit Jawa was closed so we headed to Chun Hui Restaurant instead which was packed. We had to wait for over one hour for our dishes (including the Asam Fish Curry) and were too hungry to take a picture of the dishes. We finished the Curry, Fried fish, Beansprout and Steamed Otak in less than 20 minutes. 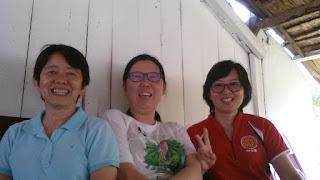 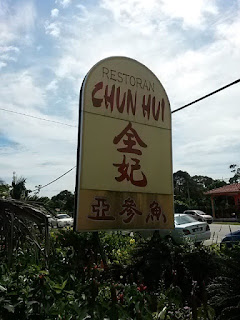 Posted by tripletrogon at 7:02 PM 2 comments: 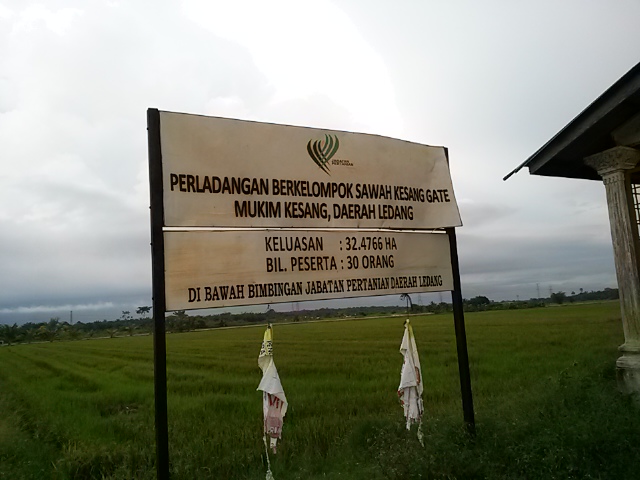 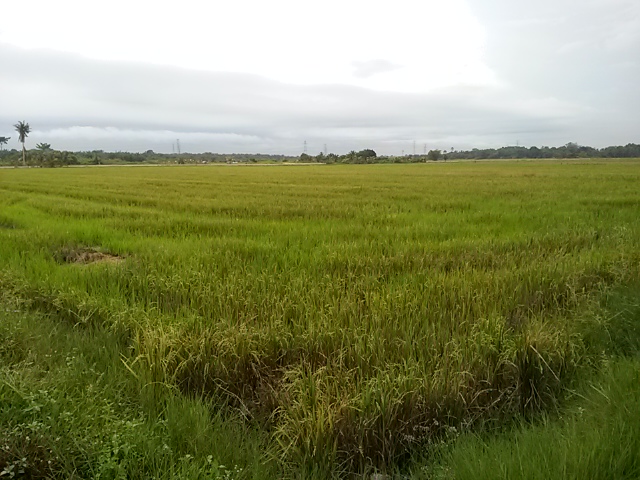 Paddyfields were yellowing but in terms of birdlife, it was very quiet. Measurement tool to monitor water level in one of the canals below. Looked to be at a very low level compared to the measurement tool in the pond at Sungai Rambai. 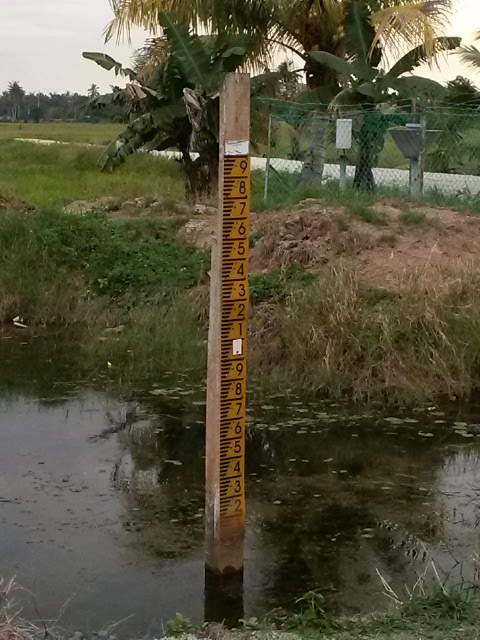 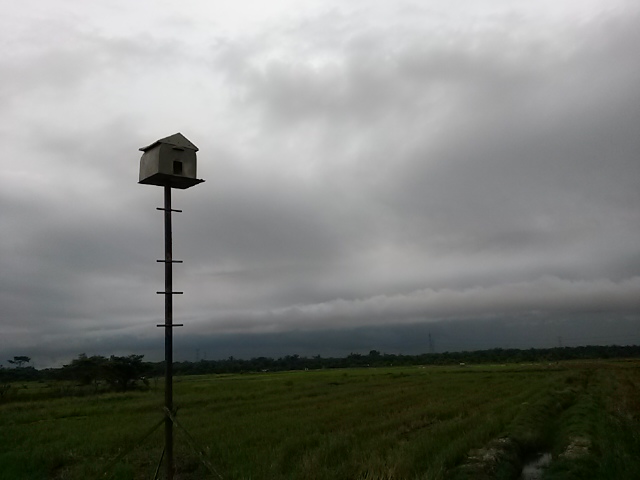 Owl house set up for the farmer's best bird buddy the Barn Owl, I suppose. Didn't see any owls flying home to rest that Saturday evening & I waited until 6.30pm. It was getting late and unlike the owl, I had to check-in to Streetview Hotel since it will take another 15 minute drive from paddyfields to Muar, according to Waze. 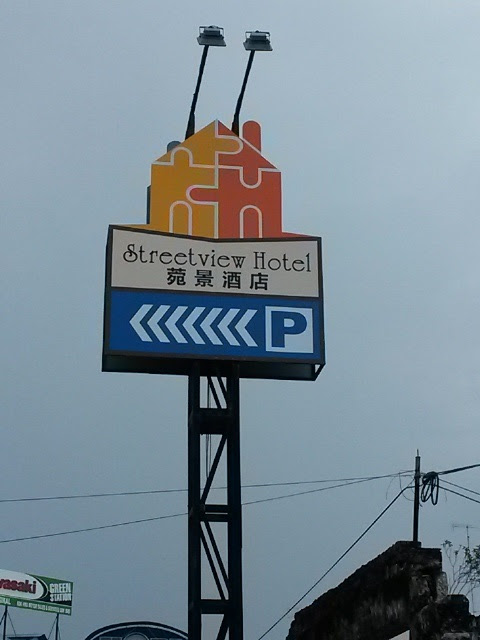 Lucky there's this sign to the Hotel in Muar. It was getting dark when I arrived in Muar so signboards such as this are a welcome sight after spending earlier hours exploring the birdwatching sites around Sungai Rambai and Ledang District.
Posted by tripletrogon at 6:32 PM 2 comments:

Weekend in Muar and Sungai Rambai 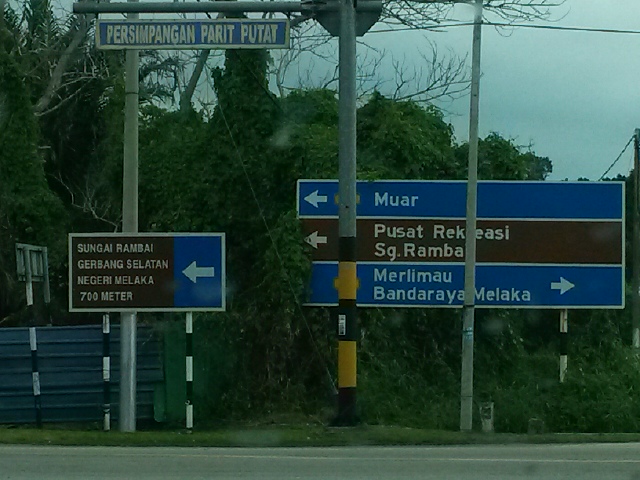 Sungai Rambai is the gateway to Malacca from Johor. Finally found my way there from Lebuhraya AMJ after exiting Merlimau/Jasin from Plus Highway. About two & half hour drive from KL. 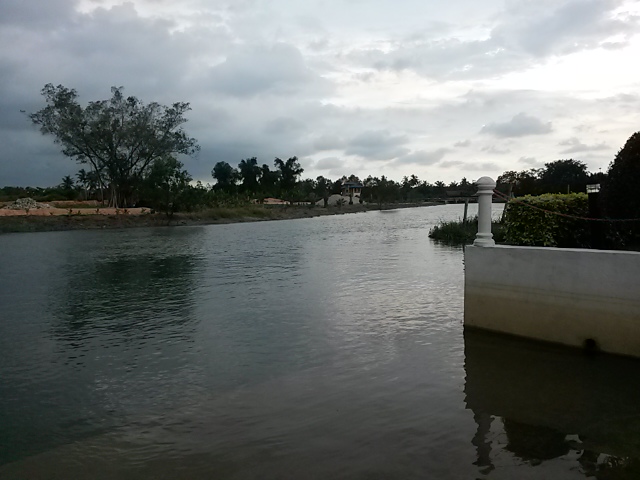 Slope for small boats & kayaks to enter Sungai Kesang. The name of the town is Sungai Rambai but the river is differently named. This was a river with clear water and I could actually see some parts of the riverbed, with river grasses, algae and all. 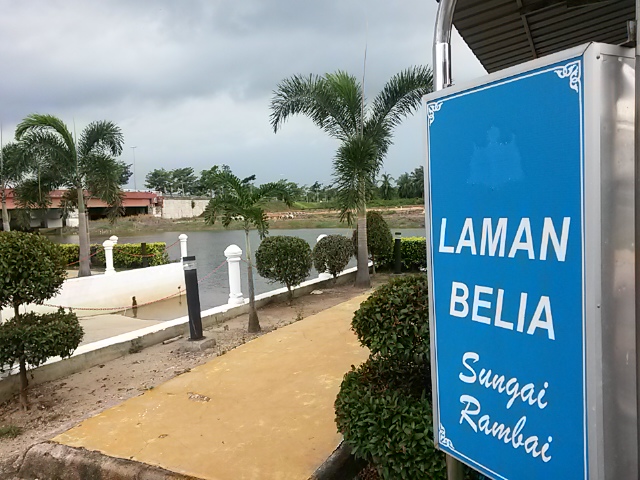 Part of the recreational park in Sungai Rambai. The park was not that crowded despite it being a Saturday. 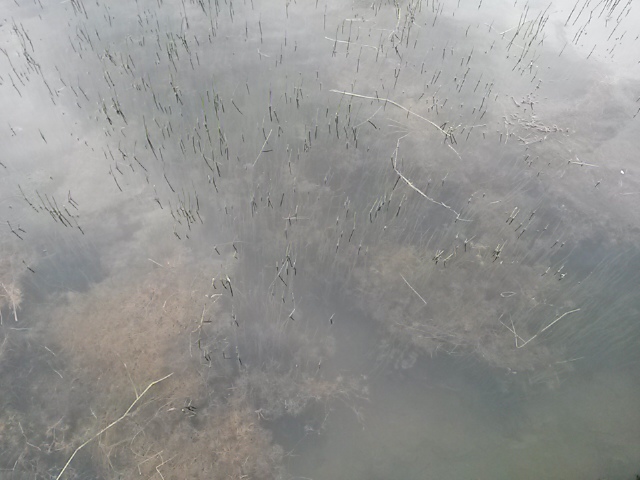 Grasses & other plants forming the riverbed. I marveled at the sight of this river, since (sadly) it is not a daily scene in the city. 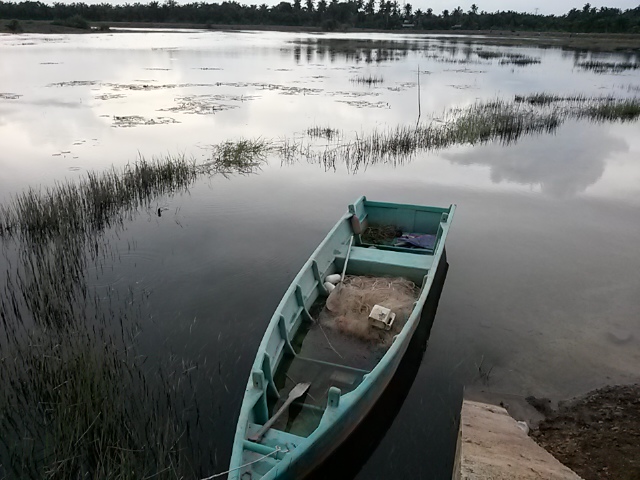 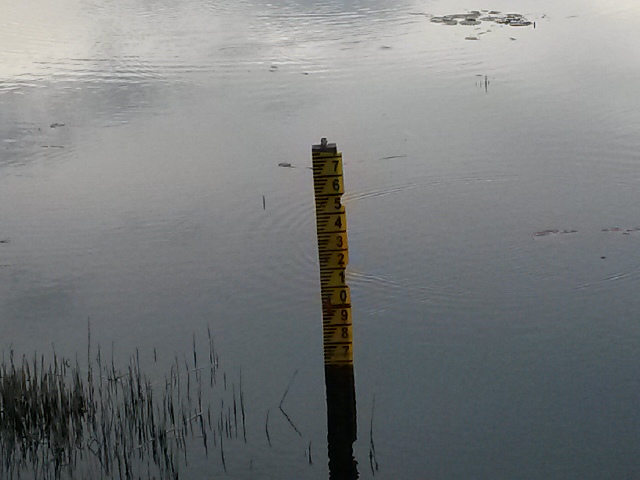 Measurement tool to monitor the annual floods, I suppose. Quite a few people were fishing along the edges of this pond. 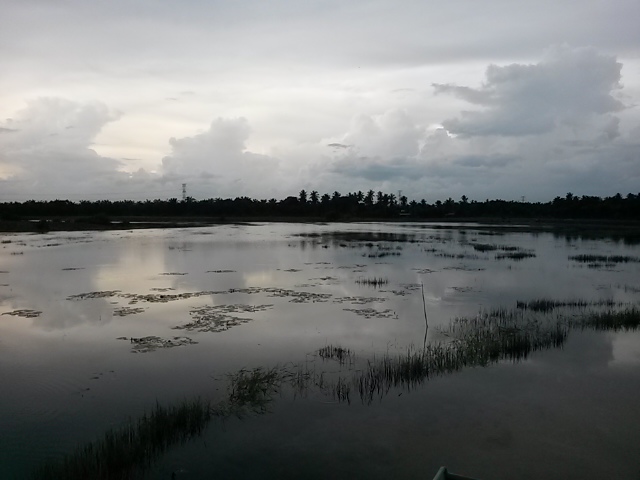 Small flock of Lesser Whistling Ducks joined the larger flock of Purple Swamphens in this pond on that Saturday, 22nd November 2015 evening. Also sighted were the Common Sandpiper, Purple Heron, Grey Heron and Egrets. Watergate at the edge of the pond which regulates the flow of water from surrounding canals. Hardly any trees growing along the edges of the pond. Left the pond at around 6pm. Planned to continue birdwatching early Sunday morning with my friend Fong Lin who is an avid photographer.
Posted by tripletrogon at 2:03 PM 1 comment: 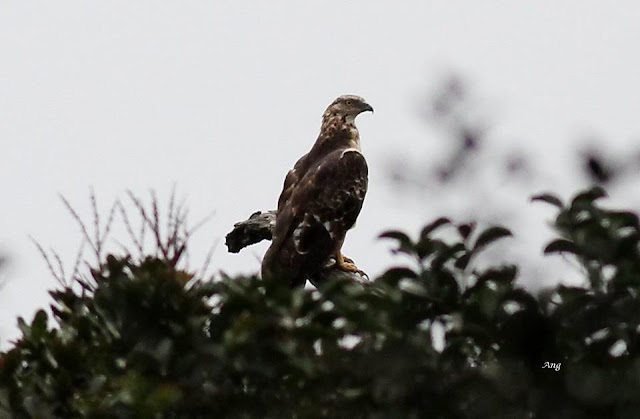 We had just taken a short lunch break at around 1pm and continued exploring the forest that surrounded this old road. Pleasant surprise to see this Honey Buzzard at the top of Genting Highlands. Seen soaring along the forest canopy alongside this old road earlier before it was spotted flying closer to us before it perched on the tree, when we were walking back to Ang's four-wheel. It was just around 3pm on a hot and sunny Saturday afternoon, end-October 2015. Having lunch of fried rice with homemade chicken curry (brought all the way from Malacca by Raj) at 1,000m above sea level, amidst cool mountain breeze, was simply unforgettable. 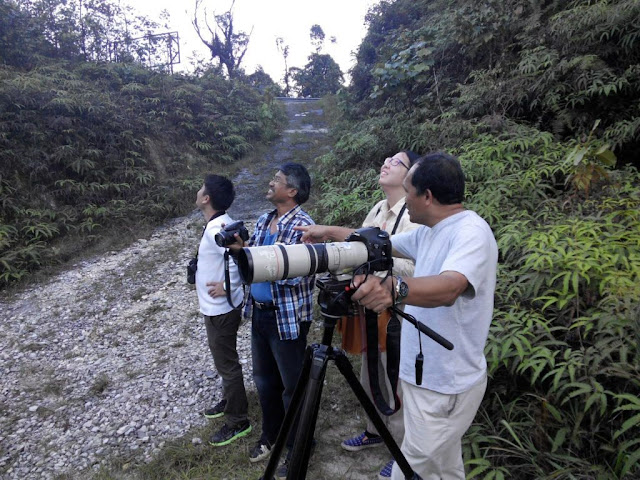 Birdwatchers from Malacca and Negeri Sembilan, CT Chan, Raj, Vuthy and myself, and lead by Ang Teck Hin, our birding guru. Realized I was sunburnt the next day but I didn't mind. All in, 33 species of montane & sub-montane birds were seen on that Saturday morning from 9am to 6pm. Seeing all these birds and the clear blue skies in Genting Highlands made every second of the outing memorable.
Posted by tripletrogon at 5:03 PM 3 comments: