The Place where Crocodiles once roamed 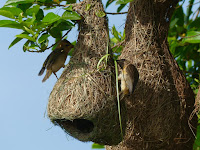 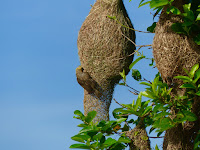 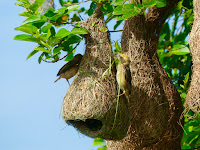 Busy weavers of Sungai Balang were still in midst of constructing their nests with fresh long blades of green grass. Amazing avian architects at work! 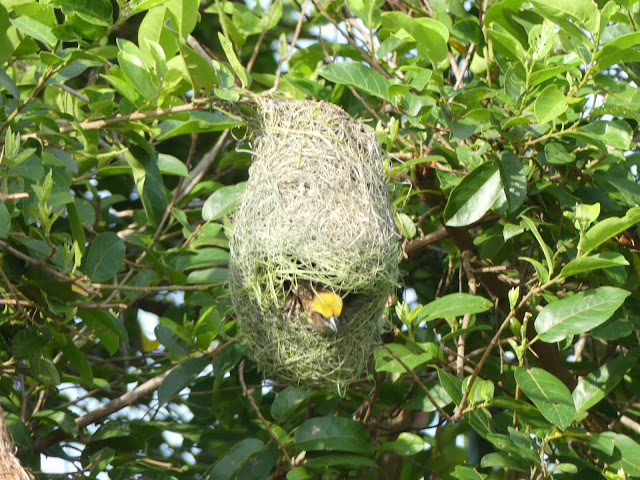 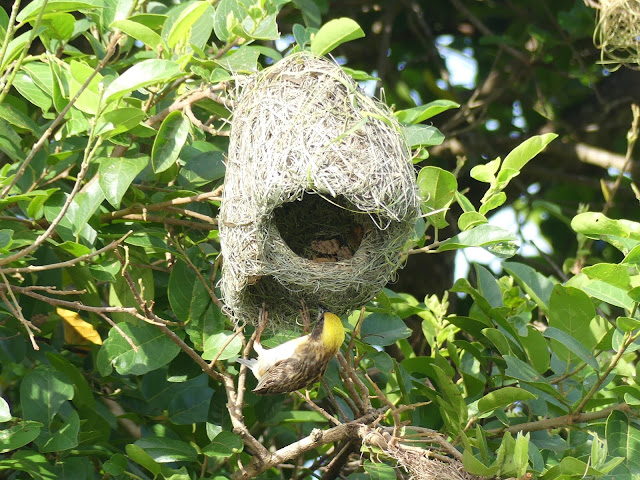 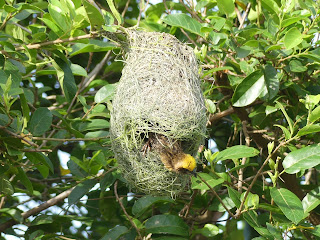 Sungai Balang in Johor was my next destination for birds and waders after Parit Jawa. Together with my wader sifu Ang Teck Hin, we scoured the paddyfields at this site which had been made popular in the past with sightings of the Little Curlew, Small Pratincole and (many years ago) a juvenile Amur Falcon. The latter was a vagrant visitor to Malaysia, suspected to have been blown off-course by stormy winds of Southeast Asia. There is an odd-looking green plastic statue of a Crocodile which passers-by will encounter going pass Sungai Balang as you enter the paddyfields from the trunk road. It is perhaps a reminder that there is a river called Crocodile Nest River ("Sungai Sarang Buaya") nearby. A 3m long crocodile had been sighted in this area a few years back. A tree full of Baya Weaver nests caught our attention. One of the weavers popped out of the nest, its head all golden yellow as it continued to put the finishing touches to its "home". Another pair were adding on fresh green blades of grass into their nest (see earlier pictures above). We marveled at these winged architects.
The birds and waders spotted at Sungai Balang, Johor have been entered through eBird  and that checklist is available HERE. I had the chance to marvel at the beautiful plumage of the Curlew Sandpiper from a scope. Was struggling to get a good video recording of the Curlew Sandpiper feeding in the paddyfields that hot Saturday morning. Taking pictures and videos from a scope with mobile phone affixed onto it  wasn't easy, more so when the glaring sun made everything look dark on the mobile screen:( Some of the wader species seen as well as the Grey Heron are pictured below and above (the Wood Sandpiper).
Posted by tripletrogon at 6:41 PM 1 comment:

There's Something Special about Waders

Waders baffle me. When I was walking towards the end of the jetty at Parit Jawa, Johor, little did I realize God's Creatures, (Small in this case) were resting on the floating logs at the estuary - Red-necked Stints, Terek Sandpipers and Lesser Sand-Plovers, to be exact. Their brown, grey and white plumage almost blended with the colours of the logs. Some of these migrants were all fluffed up and extremely cute-looking when you take a closer look at them through a scope. The breeding plumage of the Lesser Sand-Plover stood out amongst the flock of waders. I loved looking at the Stint stretching its wings and leg, as the other hopped over to the other log - the animated GIF for this as below. It was a very windy Saturday morning and I had met up with my Wader Guru, Ang Teck Hin to do some wader watching in both Parit Jawa and Sungai Balang. Lesser Sand-Plover and Terek Sandpipers are listed as Least Concern in IUCN Redlist whereas the Red-necked Stint is listed as Near Threatened. More to come in the next blog post on Sungai Balang, although the Little Curlew remained a no-show. Earlier post about the Little Curlew is available HERE. Link to the video of the waders is available HERE.

Woodpecker in Malaysian Rainforest and Woodie in USA

There are a total of 42 species of woodpeckers in South east Asia (including Malaysia). I suppose my fascination of Woodpeckers ("Woodies") was ignited by a very familiar cartoon character from Universal Pictures , USA who goes by the name of Woody Woodpecker. Would literally hear this cartoon character's odd goofish "calls" before the program starts. As kids, my sisters and I would rush to the front of the TV after we'd have our dinner and laugh at Woodie's antics. Walter Lanz was the creator of this red-headed woodpecker who first appeared in the 1940s on Television through a show called "Knock Knock" (as per picture below). The orange-backed woodpecker has a very loud call and I was initially "fooled" into thinking it was a large squirrel that was calling when I saw this woodpecker species in Taman Negara. Though our Malaysian woodpecker doesn't possess the weird behaviour and isn't up to mischief-making like the USA cartoon character, I think its loud calls would have put Woodie to shame:) For Woodpeckers of World by Gerard Gorman, click HERE. 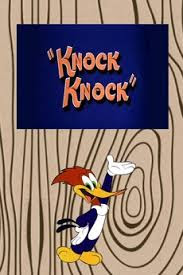 Posted by tripletrogon at 8:39 PM 2 comments: